Hope you’re doing well. Sorry it’s taken me an age to write. I’ve been meaning to put fingers to keyboard for months now, ever since my lovely Cognitive Behavioural Therapist suggested back in January I get in touch with you and tell you a few home truths you should and need to hear.

I could make excuses for why I haven’t done so before now. ‘The dog ate my laptop’ (alright, so I don’t have a dog). ‘I’ve been a bit busy’ (understatement of the decade, but I still could have made time, I know). I know, here’s a good one: ‘I just plain forgot’. Well that’s just a lie, isn’t it? I hadn’t forgotten I just didn’t want to do this. The timing wasn’t right and, if I’m honest, I didn’t think you deserved a missive from me.

But I’ve slowly come round to the idea that maybe you do. I’m still not totally convinced, but everyone deserves a second chance, don’t they? And for whatever reason, now feels like the right time to get in touch, so here it goes.

It’s not your fault.

I know you won’t believe me and I have my doubts sometimes, but when I allow myself to be rational I can see there’s nothing you could have done. Hindsight is a wonderful thing. Why do people say that? Hindsight is cruel. It eats away at you with its, ‘wasn’t it obvious things were going to end up this way?’ sneer. But even with the dubious benefits of hindsight the signs didn’t point unambiguously to the location in which you ended up. Some people call it Holland. (I bet the Dutch tourist board is a tad miffed about that…)

Anyway, where was I? Oh yes: lots of people get bleeding in pregnancy early on. Lots have much heavier and more prolonged bleeding than you did and their babies are just fine. It’s not your fault that for 14 weeks you couldn’t get your doctors to get the test results from the out of area hospital you ended up at that Christmas. Your doctors were awful. You fought practically daily to see a midwife more than the once you managed in the whole 29 weeks of your pregnancy, even though you’d been told you were at high risk of complications. When all those phone calls didn’t work, you did the right thing. You changed surgeries. It’s not your fault your baby arrived five days afterwards.

Lots of people get stressed in pregnancy without it ending in the wrong kind of tears. And why shouldn’t you have been worried when your first child nearly died at birth? When you’d been told by two surgeons and one gynae that you needed an elective c-section for any subsequent pregnancies? You had to battle for this c-section. 3 condescending VBAC talks and one very helpful discussion with the Patients Advisory Liaison Service (PALS) later you finally saw the mythical consultant who was supposed to have been supervising your troublesome pregnancy for the previous 28 weeks. You got that c-section date. It was supposed to be a year ago today. You fought the good fight for your son. It’s not your fault her arrived the week after that appointment.

And lots of people work in pregnancy and work hard too. Come on you know how this stuff works. You’re a feminist academic. You teach gender politics (among other things) you’ve written books and articles about the impossible cultural pressures placed on women in the past and how they’ve negotiated their way out of them. You’ve read and written about dozens of eighteenth-century pregnancy manuals and the misogyny they conceal beneath the spurious rhetoric of medical professionalism. You can see how little things have changed.

Don’t give into this crap. I am so bloody angry with you for giving into this crap! You’ve even made me swear on your blog, which I know you try hard not to do. If your students ever found out about this, about what a sell-out you are, they probably would be even more disappointed in you than you are. And that would be no mean feat!

So you were at work 65 miles from home trying to be smart and articulate when you went into labour. OK, you’d had bad Braxton Hicks contractions the night before. Lots of people get these. And you were going to tell the midwife about them when you finally got to see her that week for midwife appointment number two. It wasn’t your fault that Boo decided to make his appearance before then.

And most of all, it wasn’t your fault he got meningitis. Please read that sentence again. You need to hear me. How could it be your fault? It wasn’t anyone’s fault.

People often say to you ‘You must be so angry about how things have turned out.’ Presumably they mean angry that Boo survived prematurity only to be struck down with an illness that has left him brain damaged and living with epilepsy and probable cerebral palsy. Well you’re not overjoyed about it, I can see that, but I can also see that anger makes no sense to you. Who would you be angry with? The hospital? Life? Any or all gods? Your stupid womb?

Why you, people say? Well why not you, you say back. You aren’t angry. I know it. But you are so unkind to yourself. You blame yourself daily for what’s happened. You berate yourself constantly for letting him down, for not even being a good enough mother to either of your kids, let alone a great one. Maybe you should get angry. But not at the world. At you! What are you playing at?

You fought for this baby throughout your pregnancy and you regularly go into battle with the NHS, government bureaucracy, your daughter’s school, people’s prejudices and yourself to be your kids’ advocate. You often  bury yourself to do this alongside your job. You can’t criticise yourself for not trying.

If you’re still reading this, which I doubt, the eye-rolling has probably started already. The yeah-buts are probably whizzing around your head. The oh-she’s-just-trying-to-be-kind-and-doesn’t-mean-its are likely bedding in. So I’ll stop now with a plea. Read this again some time. You might not believe me this time or the next time you glance at this, but you might one day.

And if none of these rhetorical strategies has worked, here’s one last gambit. How could this be anyone’s fault? How could they be anything other than a source of incredible joy and pride? 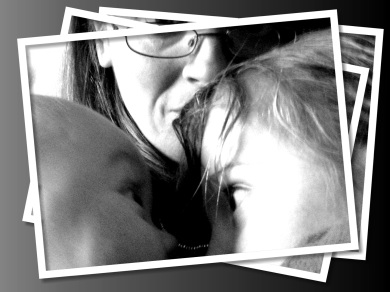 43 thoughts on “Dear Me: A Letter to Myself”