Milestones very easily become millstones, if you’re not careful, in this odd little life of ours. I spend a lot of my time hoping that Boo will reach as many physical and cognitive milestones as possible. And I spend the rest of it trying to persuade myself it doesn’t matter if he doesn’t get there. Boo just does things in his own way. Each inchstone (and there have been a bundle of those lately, which I hope to write about in the coming weeks) is hard won and much appreciated by all of us.

But of course gross and fine motor and cognitive milestones are only part of growing up. There are loads of other firsts in our kids’ lives that matter. Hugely. And many of them, I have come to realise, we have total control over. Like the first time we took Boo to the beach, or he ate ice cream. All happy, lovely milestones that you don’t need to do several hundred hours of physio to make happen.

But one of these firsts I have been putting off I have deferring for ages. You see, I just didn’t want to get Boo’s hair cut. If you read this blog regularly and catch the odd glimpses of him I put on here, you’ll know he’s a blondie. A gorgeous, wavy blondie, with little curls at the base of his neck.

For months now, various people have been asking me when we are going to get his hair cut. Every time I felt sad. And I didn’t know why. I think people thought I wanted to keep my baby looking like a baby for as long as possible. Maybe I did, but maybe not. I think it was that he just looked so lovely as he was.

It was also, I think, that it felt a bit like lopping off Samson’s locks. It’s not exactly that I thought he would lose his Boo superhero strength with a trim, but that hair on my boy’s head was hard won, let me tell you.

I waited so long for my little, beautiful bald 29-weeker to lose the fine hair that covered his body as it should have continued to do in the womb for many weeks and grow some on his head. I wasn’t ready quite ready to see it go. 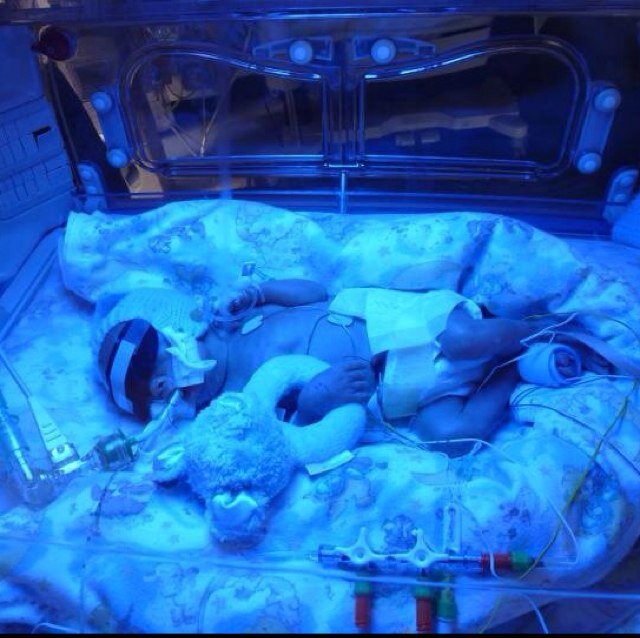 But, of course, the weather has been so hot lately. And boy does Boo feel the heat. Ex-premmies often struggle with regulating their body temperature. Kids and adults with cerebral palsy often do, too. Kids who have to wear dynamic orthotics (basically a lycra wetsuit which Boo wears all day under his clothes) feel it even more. I couldn’t do anything about his prematurity, the CP or the suit, but I could get his hair cut.

I have to admit, I was nervous. Boo has some sensory issues. It’s not a diagnosed problem, but like many kids with CP, he reacts with various primitive reflexes to unfamiliar sensory experiences. He usually accommodates himself to them quite well quite quickly, but although I brush his hair regularly, I had never approached him with a pair of scissors before. How would he feel about that? Would it be a nightmare? For him? For the haridresser? For me?

At Sissyboo’s last cut (we take her to a lovely, local kids hairdresser) I talked through my anxieties. The hairdresser, who first met Boo when he weighed about 5.5 lbs, shortly after leaving the NICU tried to put my fears at rest. They had lots of experience with children who couldn’t sit independently (he would sit on my lap) scared children or children with sensory issues and physical disabilities, she explained. They would cope.

So, with some nerves, after a terribly long and hot car journey, we went into the salon. Boo was so hot and bothered, they found him an ice lolly to cool him down as he watched his sister showing her little brother how not to be scared.

And you know what? He wasn’t. There was a bit of wriggling, eye scrunching and some sensory discomfort at times, but mostly he was fine. As the locks were lopped, I felt a bit sad, but they made such a fuss of him. Sissyboo took pictures with my phone and they took one with a digital camera to put on the wall. They also kept some hair, popped it in an envelope and gave him a certificate with his name and date on.

When we came home, Sissyboo decorated the envelope, as I looked at my little boy looking a little less little and lot more like a rapidly growing boy.

It was a first I put off and I can see why. But in the event, it was another reminder of how far he’s come. The little boy I could barely dare imagine in those days in the NICU.

4 thoughts on “Cutting it Fine”